Drupal 8 technical expertise for the University of Southern Queensland

Salsa Digital was brought in to help the USQ team deliver its student portal, UConnect, on Drupal 8.

Based in Toowoomba, the University of Southern Queensland (USQ) services over 29,000 students.

USQ had been working on updating UConnect, its staff/student portal. Initially, this internal project started in Drupal 7, however the team decided Drupal 8 would provide more benefits. The site build was taking longer than expected and they’d run into several roadblocks, including a lack of in-house Drupal 8 expertise to propel the project forward.

USQ issued an Invitation to Offer for the provision of frontend and backend technical resources. USQ was looking for someone to work with their in-house developers, focusing on solution direction, best practice, architecture planning, development, code review and so on.

After winning the job, Salsa Digital’s initial action was to send up a technical architect/lead, a backend developer and a frontend developer to work onsite with the USQ team for two weeks. However, after the first week it became clear that the project needed more than technical resources to deliver the required functionality by the start of Semester 1 2018.

One of Salsa Digital’s engagement managers visited onsite for a couple of days to gain a better understanding of the project and development blocks. The two main issues the Salsa Digital team identified were:

Technical development was put on temporary hold, while our engagement manager worked with the product owners on the high-level requirements. Firstly, we worked on a functional matrix, to clearly identify the site’s required and desired functionalities and ranked these in order of importance. The functionality covered things like:

We then moved our focus to the ticketing issues by importing data from USQ’s ticketing system into our ticketing tool (JIRA) and onboarding the USQ staff in JIRA. This meant the project was now being managed via Salsa Digital's established and mature workflow system. From there, each ticket was thoroughly reviewed to understand the work that needed to be done and to remove inconsistencies. We then assisted the USQ analysts to write new tickets for the outstanding work, ensuring deliverables matched the required features.

Our technical architect, technical lead and senior developer were initially onsite for two weeks, followed up with an onsite visit from the technical lead every three weeks. The combination of onsite visits and remote engagement ran smoothly, with sufficient communication channels put in place. During this time we provided technical leadership and Drupal frontend and backend coding expertise. We also helped the product owners write clearer tickets that included specific outcomes and acceptance criteria to help keep developers on track.

This engagement drew on our established agile methodology and our engagement manager also acted as an agile coach, mentoring USQ staff on agile project management. We helped USQ staff implement the daily scrum meeting, and nominated a USQ scrum master who worked with us to lead the agile process and keep everyone on track. We also coached them on writing sprint reports to monitor progress, and complete sprint retrospectives to resolve process issues. This mentoring process meant that when we transitioned out of the project, USQ was in a position to continue using agile methodologies (for UConnect and for future projects).

For this project the final delivery was time-based, rather than a site launch. We spent a total of 14 weeks working with USQ to help them get UConnect back on track and ensure the final product meets specifications. The new Drupal 8 UConnect was launched as a beta site, with feedback from USQ staff and students consistently positive throughout the various beta release cycles. 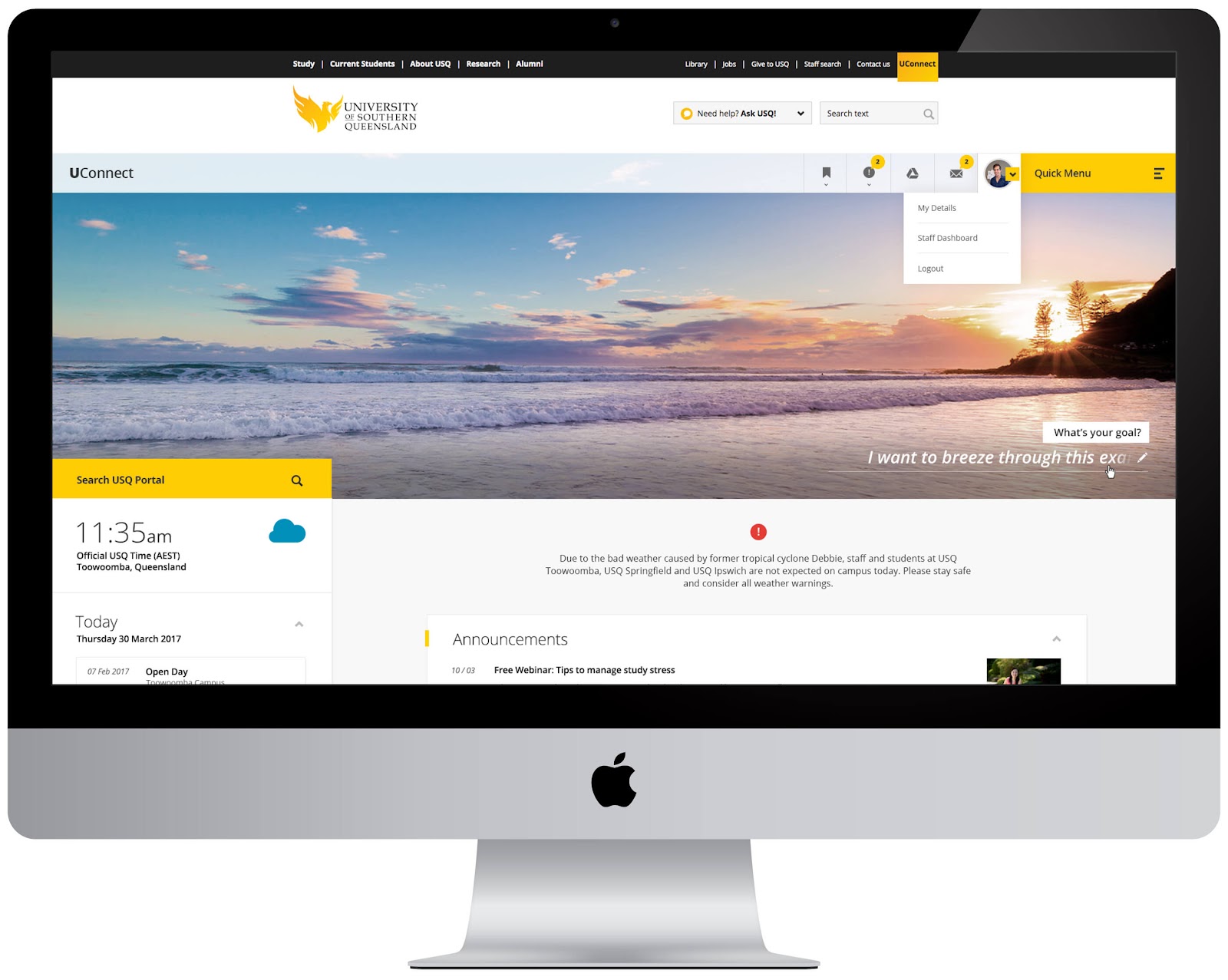 USQ received a number of benefits from bringing Salsa Digital on board:

We admit we were hard task-masters :) but the result was extremely positive. In fact, other USQ staff commented on how much the UConnect team we’d worked with improved during the process.

We were also able to scale our resources as needed, including providing an unscheduled/unplanned engagement manager to help identify the issues and get the project moving forward — this flexibility was invaluable to USQ.

“From my perspective as Project Manager, engaging Salsa Digital to work with our team of developers and analysts was a solid investment. This engagement helped us capitalise on work-to-date, develop best practice standards, ensure delivery of the project on time and of the highest quality, as well as building the capacity and skills of our team to be able to support, maintain and continually improve the product moving forward.” Duane Roth, Project Manager, USQ

During our post-project meeting, USQ listed some of the things we did well. This very positive feedback included:

We won the job on the strength of our response to the Invitation to Offer — despite being quite far away from the client! USQ was impressed by our Drupal expertise, track record and certification. Our developers are experienced in both frontend and backend Drupal development and we’ve completed many Drupal projects, including similar projects where the client had run into issues mid-project and needed help solving problems and getting the website back on track. We’d also delivered Drupal training to USQ earlier in the year, so they knew first-hand of our detailed Drupal knowledge and had confidence in our capabilities to deliver Drupal projects.

In addition, we have been recognised by Acquia for our outstanding results, winning Acquia’s Partner of the Year Asia Pacific and Japan (2016). Acquia provides the leading cloud platform for building, delivering, and optimising digital experiences.

“Alfred and the crew at Salsa Digital were very understanding of our environment and constraints, and offered a level of flexibility and responsiveness throughout the engagement that was invaluable to us achieving our project goals.” Duane Roth, Project Manager, USQ