The Northern Territory contains a wealth of wildlife, with more than 1400 species of fish alone. In this Open Data Insight, we explore the Territory’s rich fauna and see how well its animal populations are faring.

The Northern Territory’s environment changes dramatically from north to south, from tropical monsoonal forests and savannah grasslands in the Top End to rugged outback deserts near Alice Springs. This landscape variety means the Territory has rich and diverse wildlife.

In this Open Data Insight, we look at the NT fauna species listing from the Department of Environment and National Resources. This is regularly updated data that contains records of mammals, birds, reptiles, frogs and fish found in the Northern Territory. The data also contains listings of threatened invertebrate species (but other invertebrate species are not listed).

The data presented below is from March 2020. And note that fish species include those that occur in waters on the mainland as well as marine waters to the north of the Territory, extending to approximately nine degrees latitude (this is an arbitrary boundary and does not follow any formally recognised jurisdictional boundary).

Fauna in the Northern Territory

Let’s start by doing a simple breakdown of the type of animals found in the Territory. Grouping all the listed species by animal class shows that the Territory has many different types of fish, as well as diverse populations of birds and reptiles. 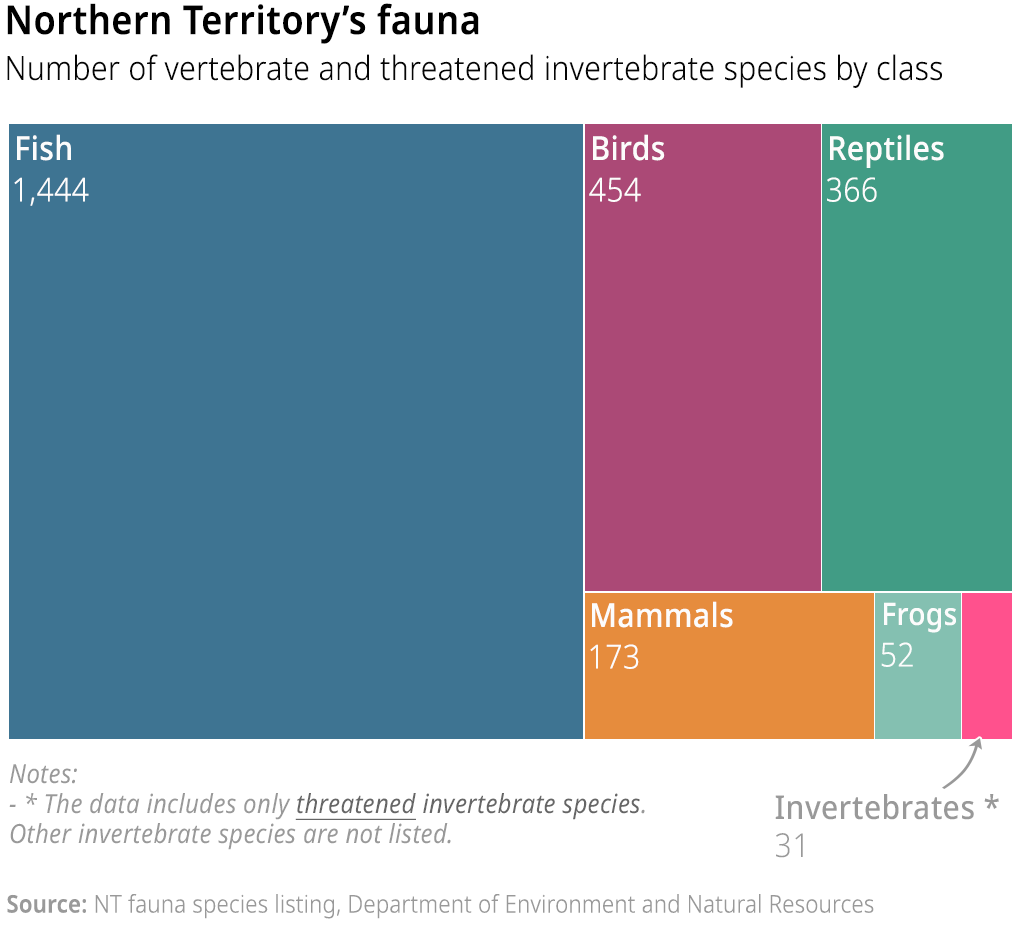 Image caption: Number of vertebrate and threatened invertebrate species in the Northern Territory by animal class.

The data also records whether the animals are endemic to the Northern Territory (i.e. not found anywhere else), native to the NT, or introduced. This classification has been predominantly completed for birds, reptiles, mammals and frogs. The majority of fish species have not been classified.

We can see many animals are native to the Territory, but 90 are very special — these species of fauna are endemic to the Northern Territory, meaning that they are not found elsewhere. 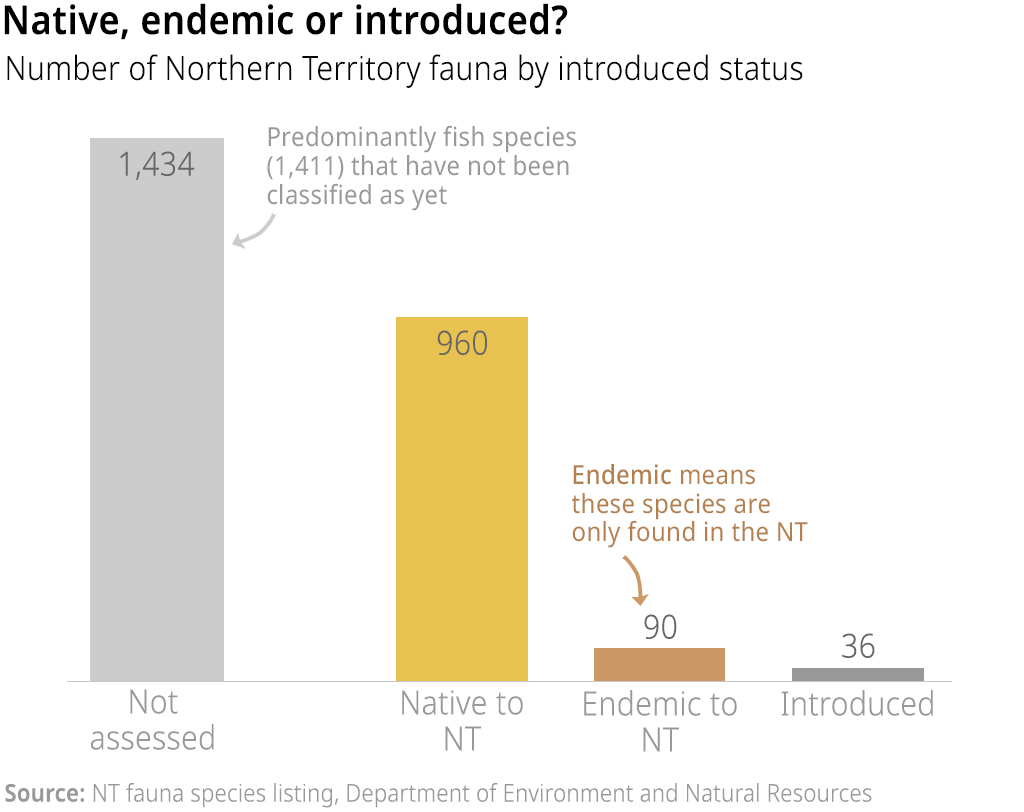 We can break this down further, and look at the introduced status based on animal class. This shows that while birds are the dominant native fauna in the NT, there are more reptiles endemic to the Territory than other classes of fauna. 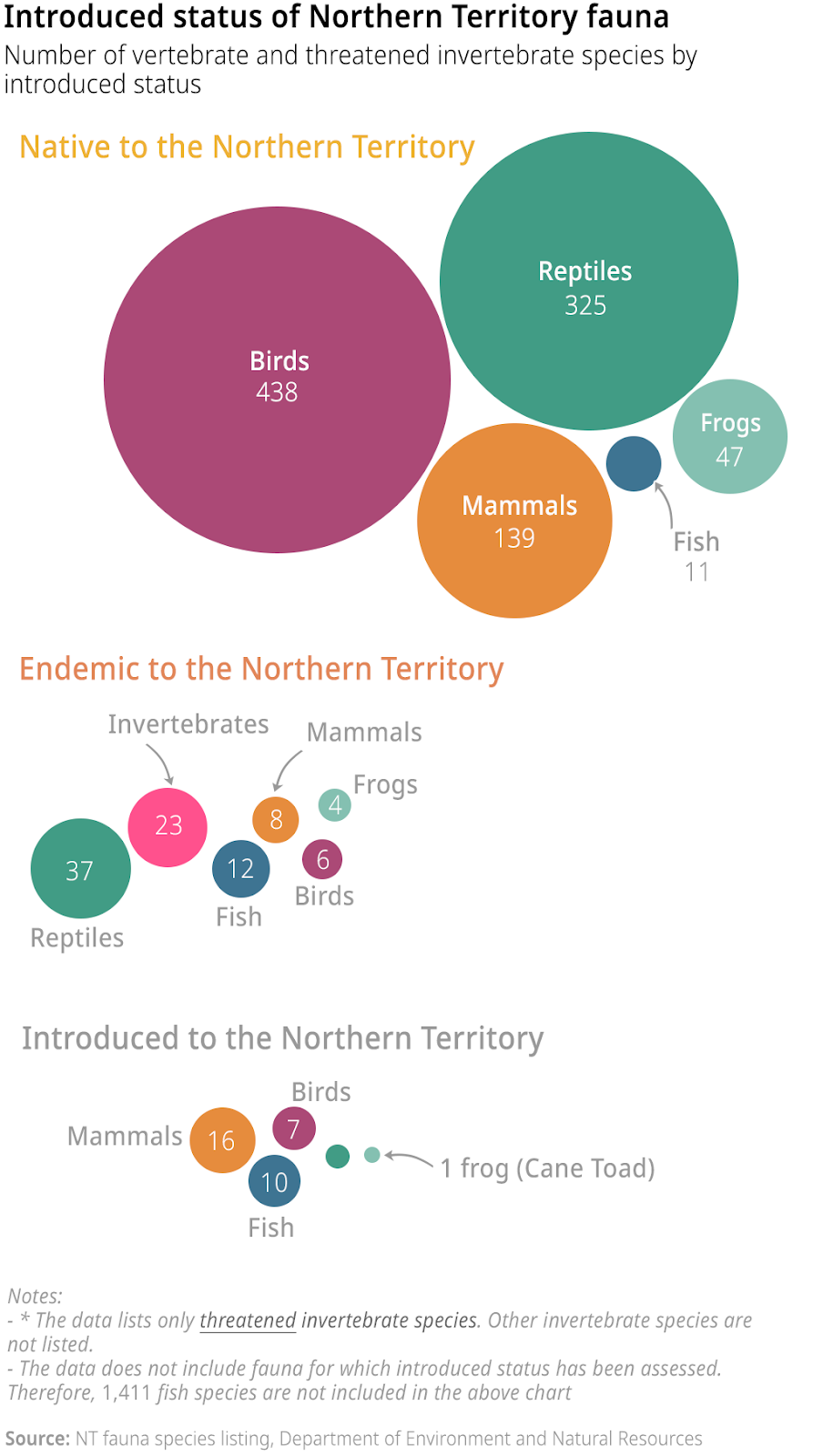 The dataset also provides the threatened species status of the Territory’s fauna. Though a significant proportion of the fish population (1431) have not been classified, this data provides a valuable insight into the health of animal populations in the NT.

Of the 10 species that are already extinct, nine are mammals (the other being a bird). The one animal that is extinct in the wild is also a mammal — the rufous hare-wallaby (also known as the mala). There are also eight species that are now classified as regionally extinct (i.e. no longer found in the NT). 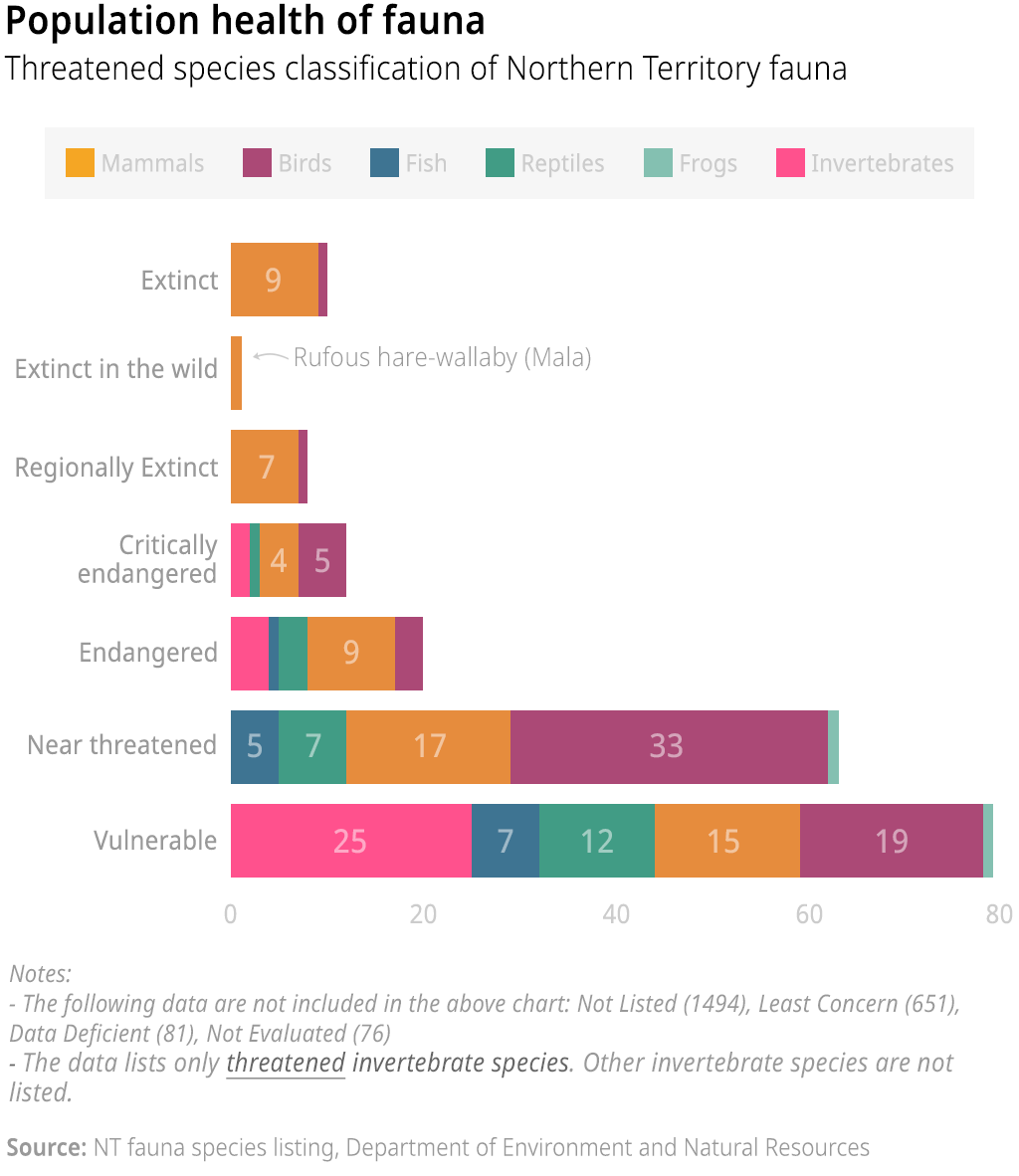 Image caption: Threatened species classification of the fauna in the Northern Territory, by animal type.

What about those unique 90 species that are endemic to the Territory? How are they faring? 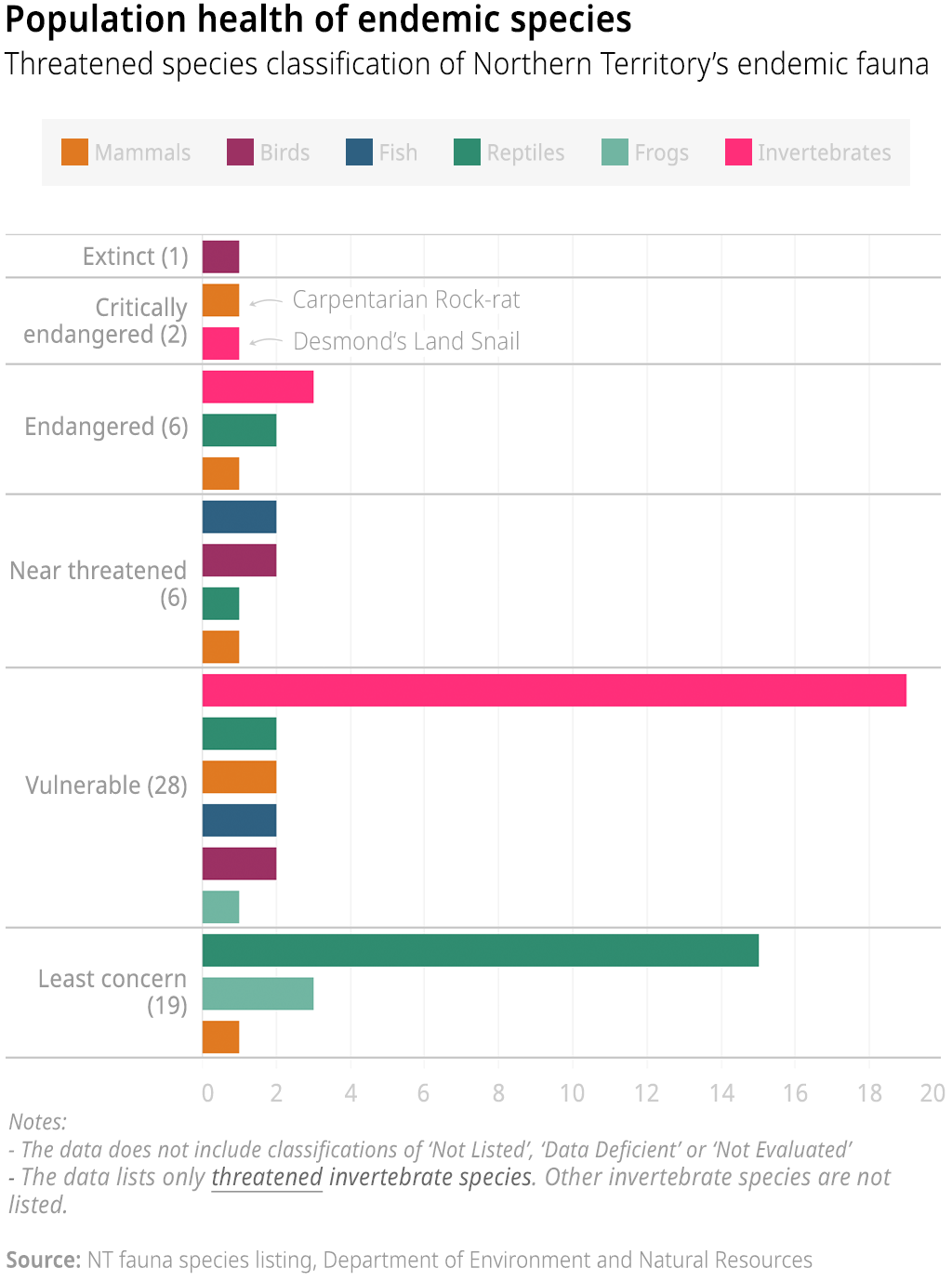 Almost half (42) of the endemic fauna populations are under stress, with 28 classified as vulnerable, six near threatened, a further six endangered and two listed as critically endangered.

The next stage of the analysis would be to use the spatial data from the Fauna Atlas and see where some of these endemic species are found, but we will leave that as an exercise for our engaged readers.

Special thanks to Dr Damian Milne, Senior Spatial Scientist within the Flora and Fauna Division (Department of Environment and Natural Resources), for assistance with this article.

The NT fauna species listing and Fauna Atlas data are from the Department of Environment and National Resources.