The road toll has been somewhat of a national obsession in Australia for many years. Featured regularly on the nightly news, the toll receives special coverage during holidays and long weekends.

While news reports tend to focus on the headline figure — fatalities — there are many different factors related to road accidents and fatalities that can be analysed.

Take the crash data from Queensland roads as an example. This dataset lists road traffic accidents from 1 January 2001 to 31 December 2018, and records information such as location, road conditions, the demography of the drivers, whether factors such as alcohol or speed were involved, and many other details.

Which months are the worst for traffic accidents?

There’s a lot we can explore with this data, but first we’re going to look at when road crashes occur and see if there are any temporal patterns in the data. 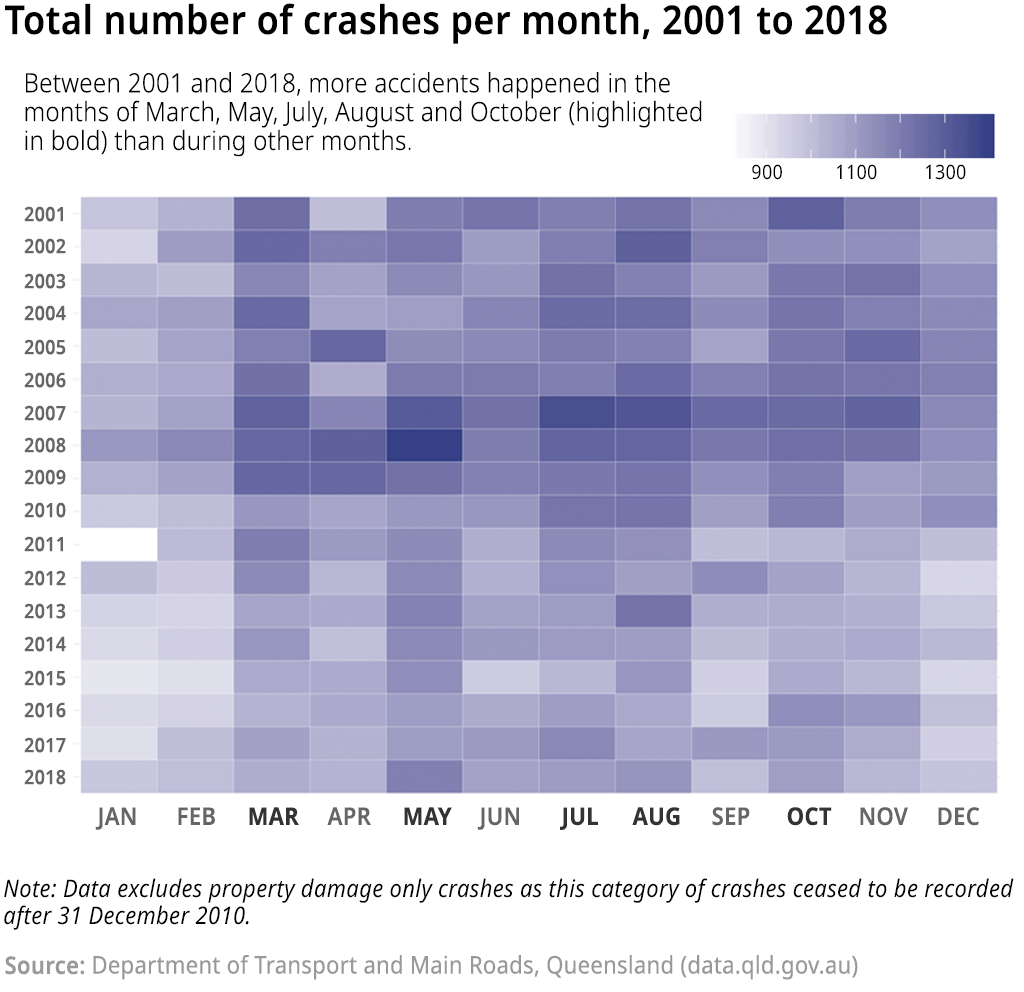 The heatmap above reveals subtle monthly patterns in the data. January and February generally have the least accidents. This could be due to many people being on holidays (at least in January) and less cars being on the roads. In March, the number of accidents start to increase, with slight drops in April (possibly due to Easter holidays, though Easter does not always fall in April), June and September (school holidays).

Finding weekly patterns in the data

Let's look at what happens over the course of a week, broken down by time of day. 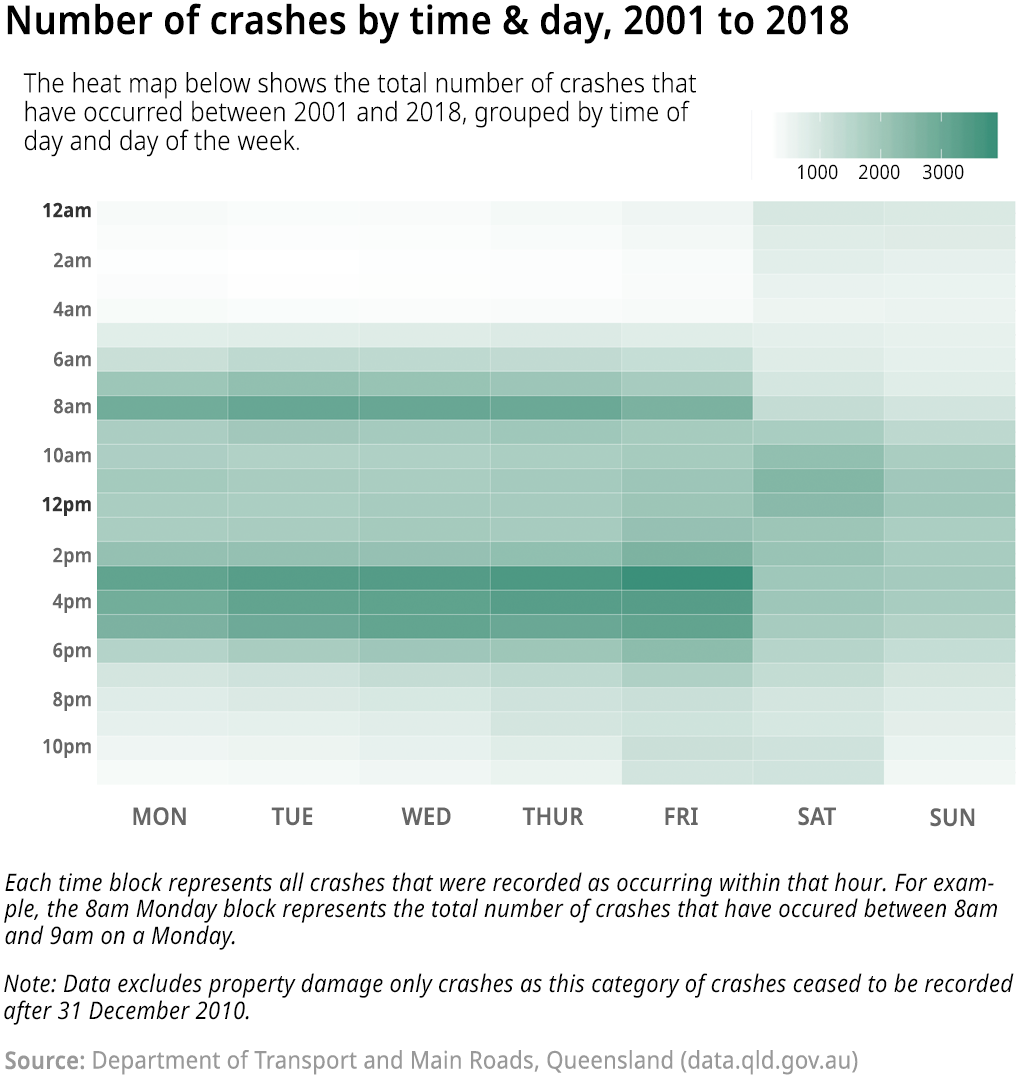 The pattern here is much clearer.

On weekdays, things are generally quiet until 6am and then the number of accidents increase as more and more people start driving. Between 8 and 9 in the morning and 3 and 4 in the afternoon are particularly bad times for accidents. This seems logical as there are more cars on the roads at this time, with the combination of commuter and school drop-off/pick-up traffic.

Notice also that the number of crashes increases across the week, peaking on Friday afternoon (between 3 and 4pm). Friday tends to be the worst day for road accidents. Could this simply be because there are more cars on the road? Or are drivers not as careful after a long week? More investigation is needed. The other thing to note about Friday is that crashes remain relatively high past 6pm compared to other week nights.

Friday, Saturday and Sunday: the worst time for fatalities

Now, let's take a look at when road fatalities occur. 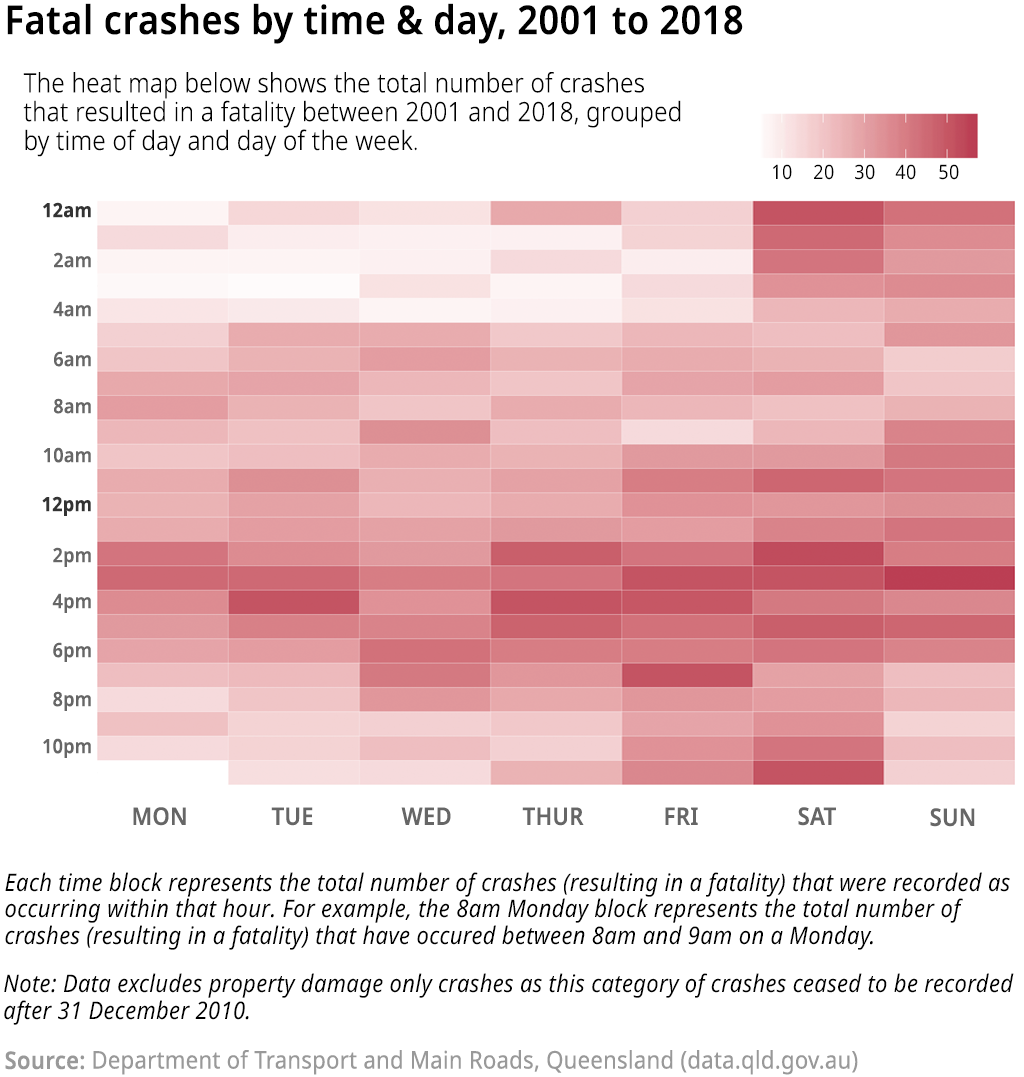 With fatalities, we are (thankfully) dealing with much smaller numbers than total crashes. The pattern here is not as clear, except that mornings generally seem to have fewer fatalities than afternoons.

But one thing that does stand out is the number of fatalities that occur during the weekend.

Late Friday night (or early Saturday morning) and Saturday night are particularly dangerous times. Sunday, while generally a relatively quiet day for accidents, seems to have quite a few accidents that result in fatalities.

Considering the high frequency of fatalities on Friday and Saturday nights, let's quickly look at the age of the drivers involved to see if it's mainly young drivers. 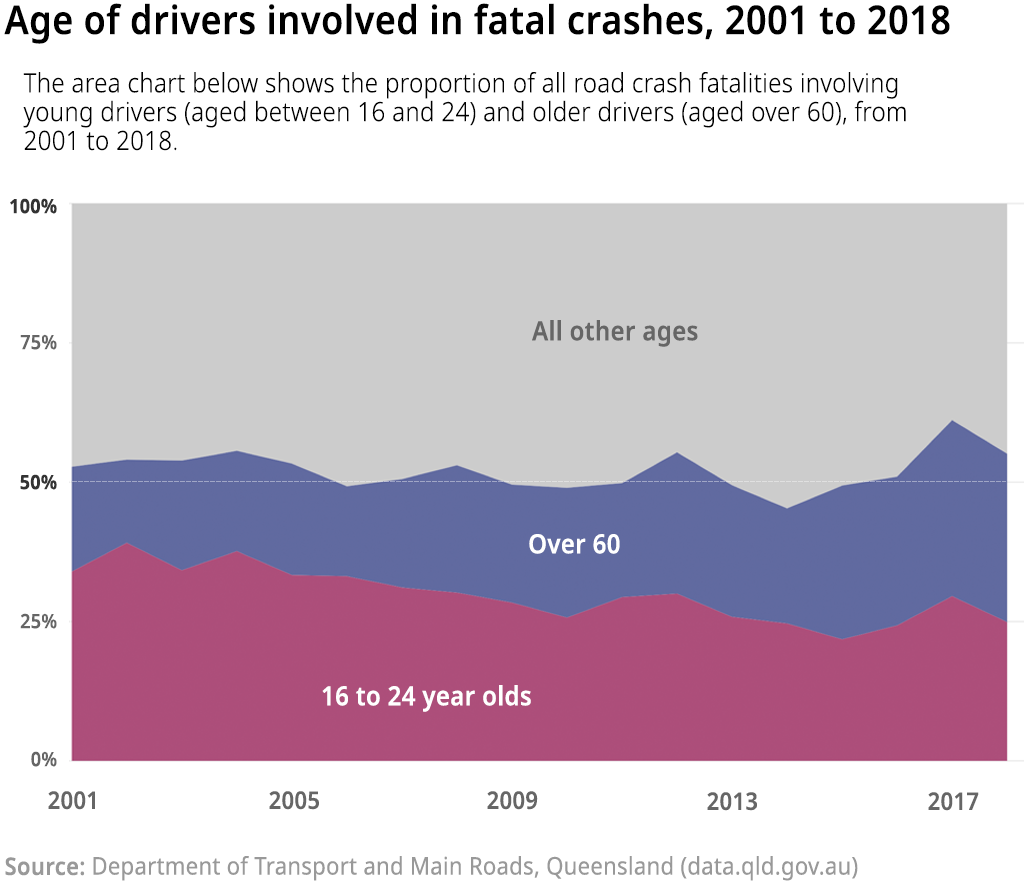 The proportion of young drivers involved in fatal accidents has decreased since 2001, but still remains a significant group considering the relatively small age range (16 to 24). Conversely, the proportion of older drivers involved in fatal accidents has increased over time. This could be due to our ageing population — there simply could be more drivers aged over 60 on Queensland’s roads, and older drivers might also be driving for longer.

The influence of speed and alcohol on fatalities

What other factors have contributed to accidents? For each crash, the police have recorded whether speeding, drink driving, driver fatigue or a defective car was a contributing factor.

It turns out that speeding and drink driving only account for about 10% of accidents (more or less depending on the year). And all four factors accounted for about 12% of all crashes in 2018. But what is interesting (and alarming) is the contribution these factors make to crashes resulting in fatalities. 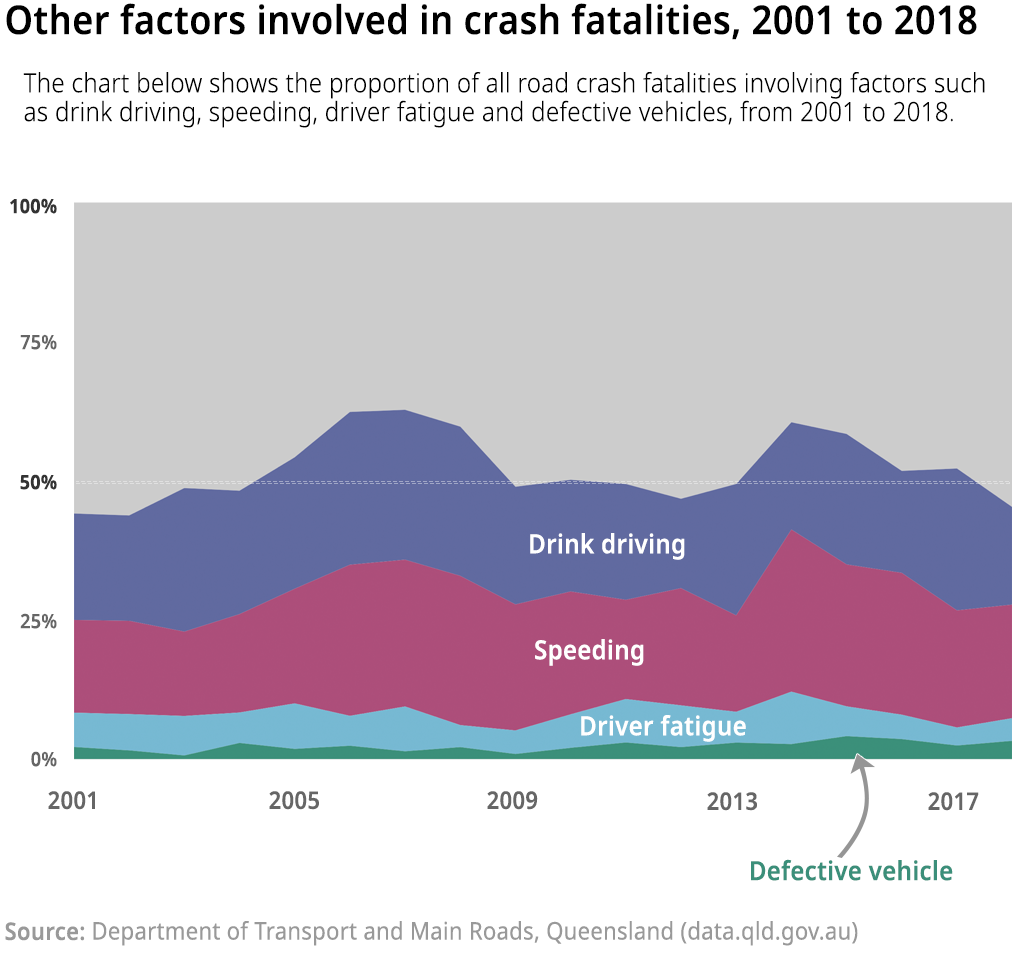 Despite only accounting for about 12% of all crashes in 2018, these factors are involved in almost 50% of all fatalities in Queensland. Speed and drink driving are particularly significant factors in accidents involving fatalities.

What else can we look at?

There is a lot of scope with this detailed dataset to do more analysis. For example, you can look at the location information to highlight accident-prone intersections. And we’ve commented about what seems like a relatively large proportion of young and old drivers involved in fatal crashes, but how does that actually fit with the proportion of drivers who are young and old?

If you do any analysis or modelling with this dataset, we’d love to hear from you.

* See any errors or issues? Please let us know.

‘Open Data Insights’ is a new blog series that will highlight open government data. Every month, we explore and briefly analyse an open government dataset with the aim of raising its profile so that others might explore the dataset further. Ideally, and most importantly, we hope to inspire you to use the data to improve people’s lives in some way, whether it's through a simple app or better informed policies.