Alfred started off with a very quick intro to the panelists, before asking them to describe their roles and how they fit in the open source movement.

First off was Amber Benjafield, who’s the project manager on the Single Digital Presence in Victoria’s Department of Premier and Cabinet (DPC). She coordinates a large team across tech, user experience (UX) and content, and is involved in lots of stakeholder engagement. Next was Jithma Beneragama the director of digital design and innovation at DPC. He leads Victoria’s transformation team, looking at how government can use tech to improve the way it offers products and services.

Finally, Alfred introduced himself — the founder of Salsa Digital, focused on helping government be more open. Alfred then went on to give a brief overview of open government, framing the concept via the Open Government Partnership Initiative and Australia's National Action Plan. Of the 16 commitments in Australia's plan, four are around open data and platform consolidation. SDP and GovCMS are two great examples of this, of our national plan in action. 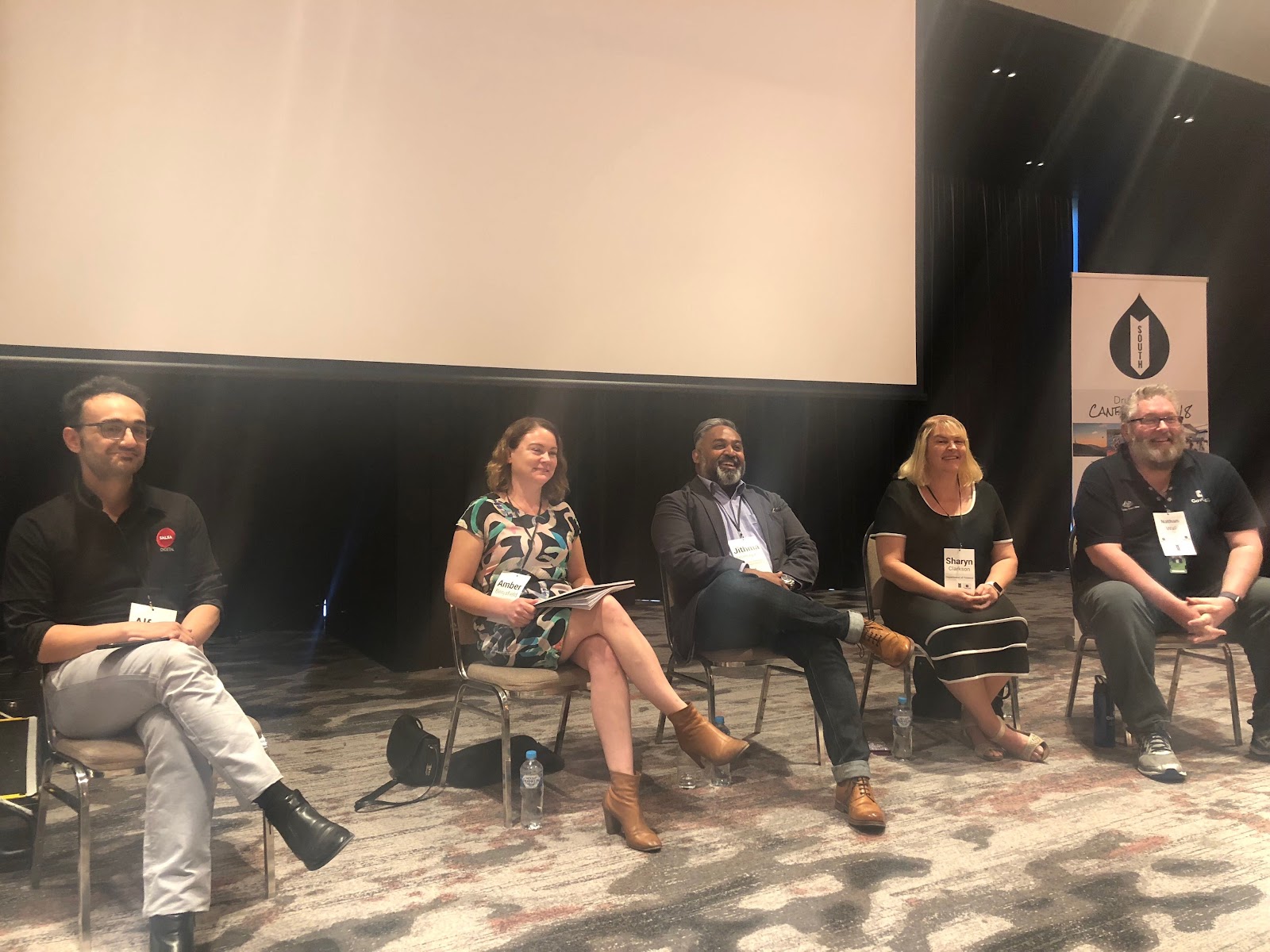 Sharyn: The reason we started GovCMS was because there was a problem in the environment. Canberra alone had 350 different CMSs. There was also a disconnect between practitioners, who weren’t meeting each other, weren’t sharing knowledge and weren’t sharing technology. Digital teams are often quite small with large workloads and people struggled to get out from their desk and meet others. This is a problem. We wanted to make something so compelling that people left their desks, worked together, shared the load, to make it easier for all of us.

Open source was a no brainer because we wanted the IP open. We wanted to create once and publish everywhere and create once and share with everyone. Didn’t want someone building a feature and then someone else having to pay to build the same feature later.

Sharyn also related this back to the two rules of the GovCMS platform:

Nathan: I agree with everything Sharyn’s said but would also add that as a taxpayer I want to see government spend money wisely on efficient things. And as a public servant, I want to break down barriers between teams.

Nathan could also relate to Sharyn’s summary about working in an isolated team with no support from other people in government and a very heavy workload. Finally, he added that GovCMS means people can change departments, bring GovCMS with them, which decreases the training barrier and saves time and costs.

Jithma: Sharyn and Nathan have covered lots of reasons for open source and the work we’re doing, so perhaps I’ll look at a more personal angle. I don’t come to work to do boring things and churn out the same old stuff over and over again...and spending a lot of money doing that. I saw an opportunity to consolidate platforms, to give everyone the opportunity to do new and innovative work, and to have a progressive approach to the web.

Amber: Government is uniquely placed to lead in this space because government doesn’t have the same commercial pressures, and being funded by taxpayers we have an obligation to share and give back. Government also has the responsibility to support and grow the community, which DPC is doing with Salsa, amazee.io, Today, Geoplex, Ogilvy, etc. SDP has a huge roadmap of features it needs to deliver on and needs partnerships to do that. SDP is about more than technology, with a strong focus on content and UX (with the pattern library containing accessible components). We’ve also built a grants template that can be used across government. Content underpins what DPC is doing with headless, and content is the ultimate open source piece of information. The syndication of content is the most exciting thing for me.

Alfred directed the panel to a new theme...busting the myth that SDP and GovCMS are the same, when they’re actually very different. He asked the panelists to highlight the key differences between the two.

Sharyn: We’re trying to create a platform that other people can then go on and do that UX and content work. Our focus is on the platform, and making things easier for agencies through the platform, for example platform security. We have a lot of conversations with our customers to see what they need and they try to roll that into the platform. We’re not responsible for content. Content design comes via the DTA and then every agency owns its own content.

Nathan: I agree with that and our focus on working with other agencies. Taking the DTA’s Design System and applying it as a theme to make it easy for agencies to implement. Also helping agencies upskill. Some agencies just don’t have the resources allocated so we’re providing help with that.

Jithma: We’re looking at what we should be doing for web transformation in Vic. Started by looking at a couple of different user journeys. One we looked at was around a child starting preschool. How would parents normally start this journey? We Googled it and found seven different Vicgov domains that tried to tell that story. Problem was, they all told that story in a different way. And some of those were incomplete. So for a citizen, if they read them all, they’d be completely confused about what they need to do. So maybe then they’d Google contact and call government and maybe they’d suggest talking to a local child care facility. If you break that down, they’ve probably wasted a couple of hours trying to work out what they needed to do. In addition, think of the costs. Jithma pointed out these weren’t actual costs, but suggested maybe a ‘transaction’ cost of 7c (1c per site) for the website access, then $20 for the phone call. And when you add up those interactions, it has cost much more than it should have.

Next, Alfred asked the panelists about how they’re sharing artefacts between their agencies.

Amber: We’re about to start working on our IRAP certification, and GovCMS just completed that long and arduous process. We share the same infrastructure so I think there will be a lot of learnings there for us. We’re really excited to start sharing that, because it runs into tens of thousands of dollars of work.

Jithma: We talked to GovCMS early on about how we should start. So we’ve gotten a lot more from GovCMS than we’ve given back but we will fix that in the future. First thing we did together was the Victorian State Government budget website, and GovCMS was there to help us through and make sure that site launched. That was a pivotal moment for us around using an open source platform (see Salsa’s Budget case study for details about that project).

Sharyn: Thank you for your security penetration report because that helped us too. So DPC has contributed stuff back. The budget was an interesting one because when I started GovCMS, being a Kiwi I said federal and state can work together. People laughed, but within a year of GovCMS opening it was happening with the Department of Environment and DPC. Environment had built a CKAN module and between DPC and Environment it was moving through the Drupal community contribution workflow. We’ve done stuff together in the past and we still talk and collaborate about what we’re working on.

Nathan: Yes, we have constant contact between the teams. When it came time to have GovCMS go to market, we were able to look at the work that was happening in Victoria, learn about some of the possibilities. We were asking ourselves: Can we actually get this working? And the answer was: Yes, it’s working over here. So we took a lot of those learnings and fed that back into our discussions. Because of the open relationship we were able to overcome any reservations. Also knew the challenges they had and were able to leap frog that.

Alfred: Alfred also brought up another example of Federal and Victoria open sourcing and working together — the amazee.io open source platform (Lagoon) admin UI. DPC pioneered using Lagoon and took a 'risk' on a young product. Then GovCMS took Lagoon, sponsored new features such as the admin UI, and gave it back.

Question for Sharyn. I’m UX designer in federal government and I’m always aware of recreating the wheel. How would you go about fostering more collaboration between federal departments and state/territory?

Sharyn: We’ve already got quite a few states on, so they're part of the online community, and also part of meetups. The DTA’s also running UX communities and there’s a close collaboration between the DTA and GovCMS.  At the moment, government’s fixed on website and brand, but we’re opening up conversations about where brand might reside with different publishing options. We’ve been leading that conversation in the GovCMS community and having conversations with DTA. Also started content communities for people who write on similar topics so they can align content rather than writing ‘competing’ copy. Don’t need to rewrite it — syndicate content. DTA is the starting point for all UX and UX communities.

Amber: I’ve recently discovered UX is a really good tool for change management and involving different departments with our UX team at the relevant point is a great way to reach a common outcome.

I’ve been following the progress of open source and I’m particularly interested in what’s happening in France and Germany. How much of a lead are you taking from Europe and other overseas’ initiatives.

Another one that’s interesting is Sweden and what’s changing with their data protection laws. How different governments and departments are changing the way they deal with data. Ethics around AI is also very interesting.

Nathan: Over last five to six years the International Working Group on Digital has been sharing. It includes Canada, US, Australia, NZ, Estonia, Belgium (and others) and we’ve been using that as a mechanism to share learnings and challenges. We get together every six weeks or so and from that we’ve seen how some of these things are taking hold. NZ is doing policy as API and you can look over the fence and see what they’re doing.

Sharyn: Content personalisation is an example. We made that open and NZ government used it. Interchange of artefacts and knowledge and people is opening up. We have strong relationship with NZ and we’re building better relationships with others too. We know that other governments around the world are using GovCMS code — sites all around the world are using it. That’s a good thing. We try to contribute back too.

Alfred closed the session by thanking the panel and putting up links to open artefacts. 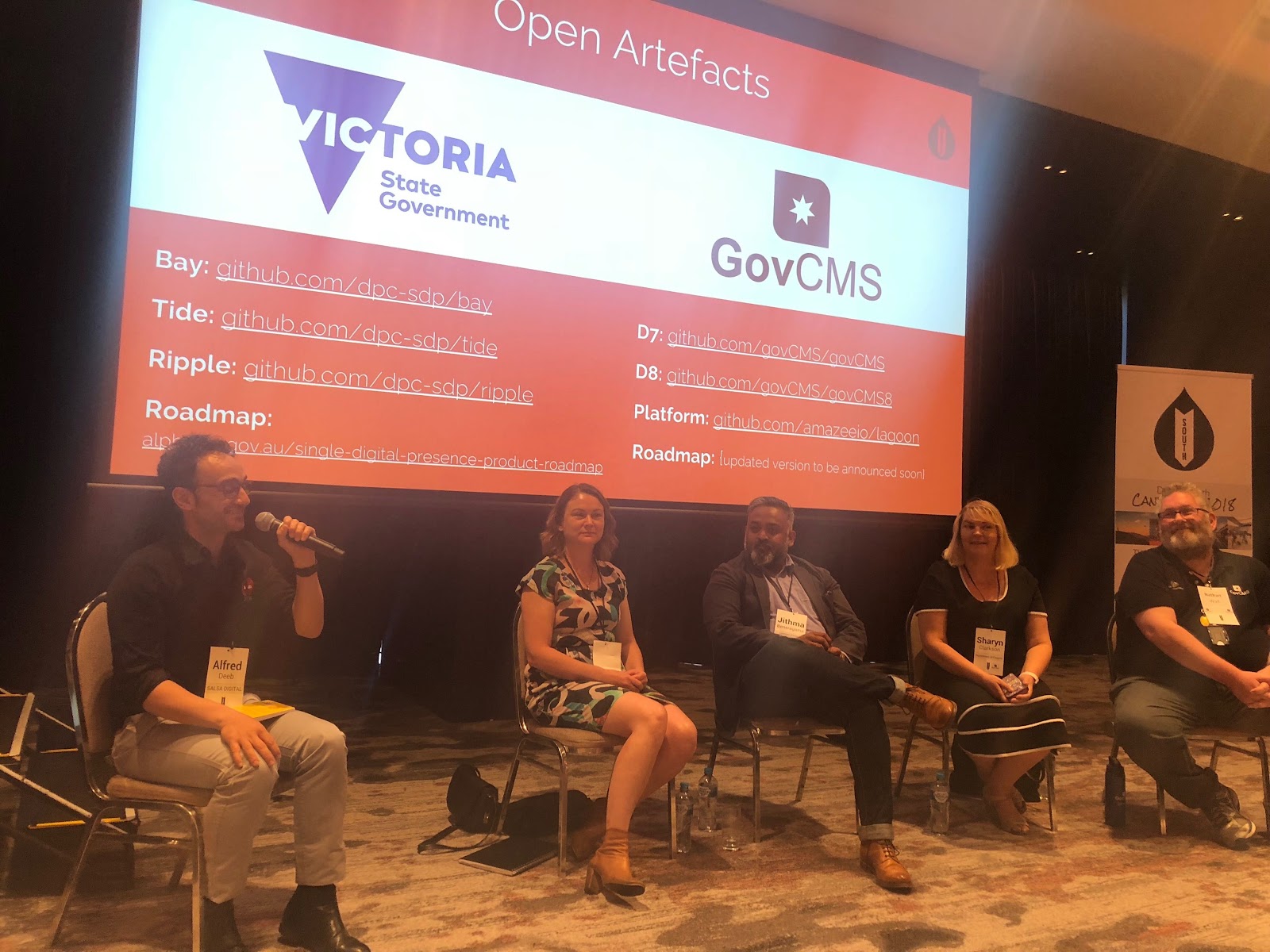